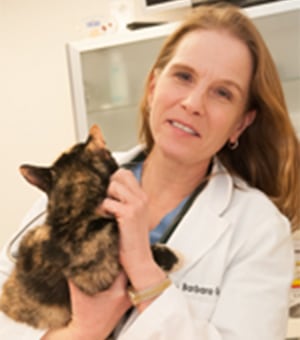 Barbara Guy, DVM, is the medical director and an emergency veterinarian at AnimERge in Somerset County.

Since the age of 12, Dr. Guy knew she wanted to become a veterinarian, after being inspired by grandfather, who also wanted to be a veterinarian as a child, but could not afford to go to college. His love for animals stirred her love for animals. She combined this love with her caregiving personality and intellect in her decision to pursue veterinary medicine, fulfilling her dream and that of her grandfather. She earned her Doctorate of Veterinary Medicine degree from the University of Minnesota.

Dr. Guy is the proud mother of three, which she considers one of her greatest accomplishments. She is also a pet mom of three cats named Bunny, Peter, and Oliver and a dog named Phoebe. In her spare time, she enjoys traveling to new places for the many new visual splendors and meeting new people. She also loves Disney and has visited many times without ever tiring of it.

Caring for Pets in Somerset County

At AnimERge, our emergency service and specialty services accepts all clients.